Kirin is a flashy dog brimming with attitude, and I wanted to make him a special collar that represents everything that he is. Kirin’s name is derived from “Qilin”, a Chinese mythical beast. Kirin’s collar features his namesake creature on an Art Nouveau style background, with a real moonstone as the centrepiece. I was inspired by the plethora of interesting stones to be found online, that I had to find a way to incorporate these in my collars. This is a new technique and will take some practice to perfect, but combined with an interesting tooled design, this should create quite a unique collar! 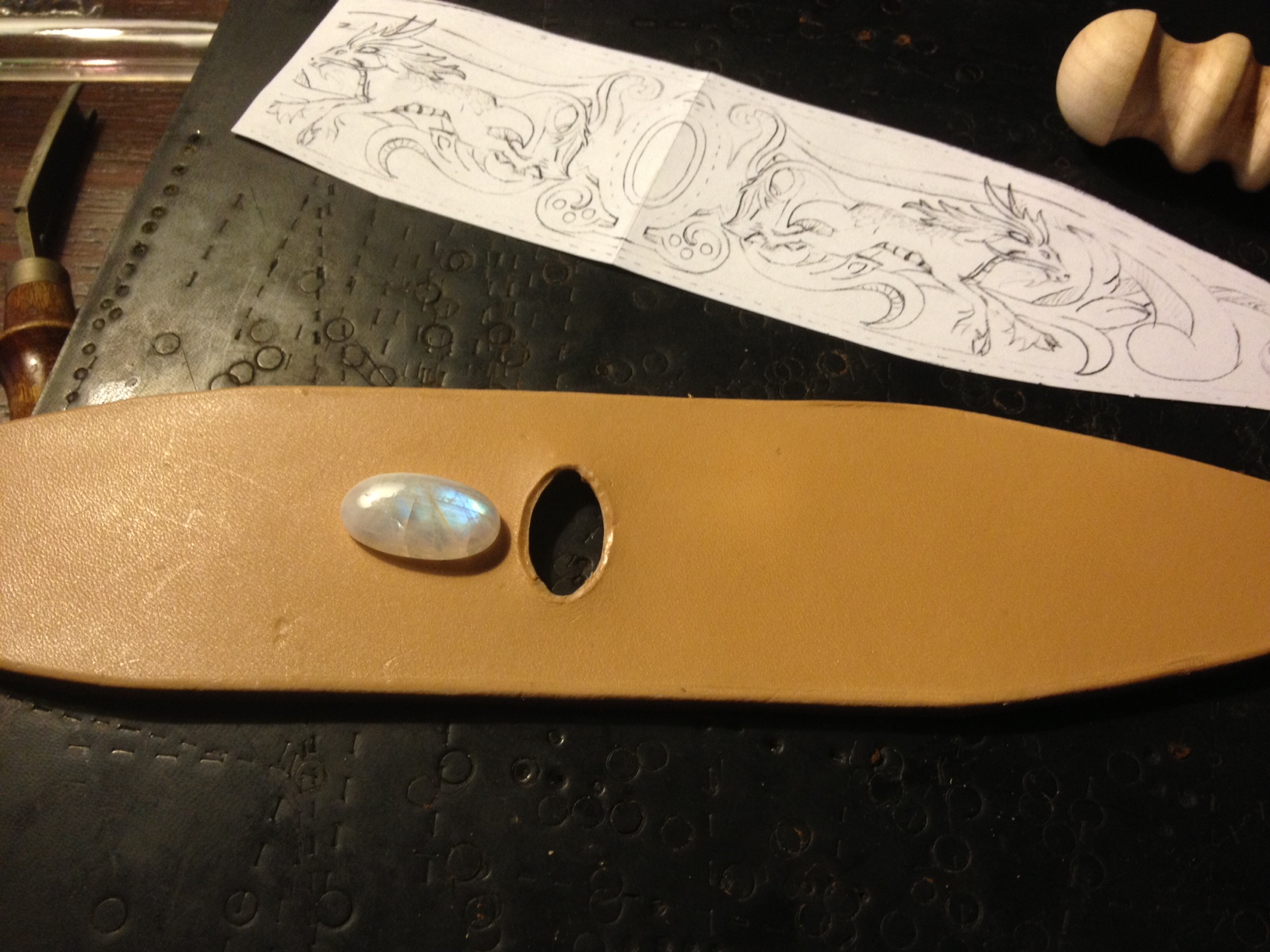 The collar itself has been cut from 8-9oz leather. The thickness will allow me to carve a nice bezel on the flesh side so the stone doesn’t protrude. 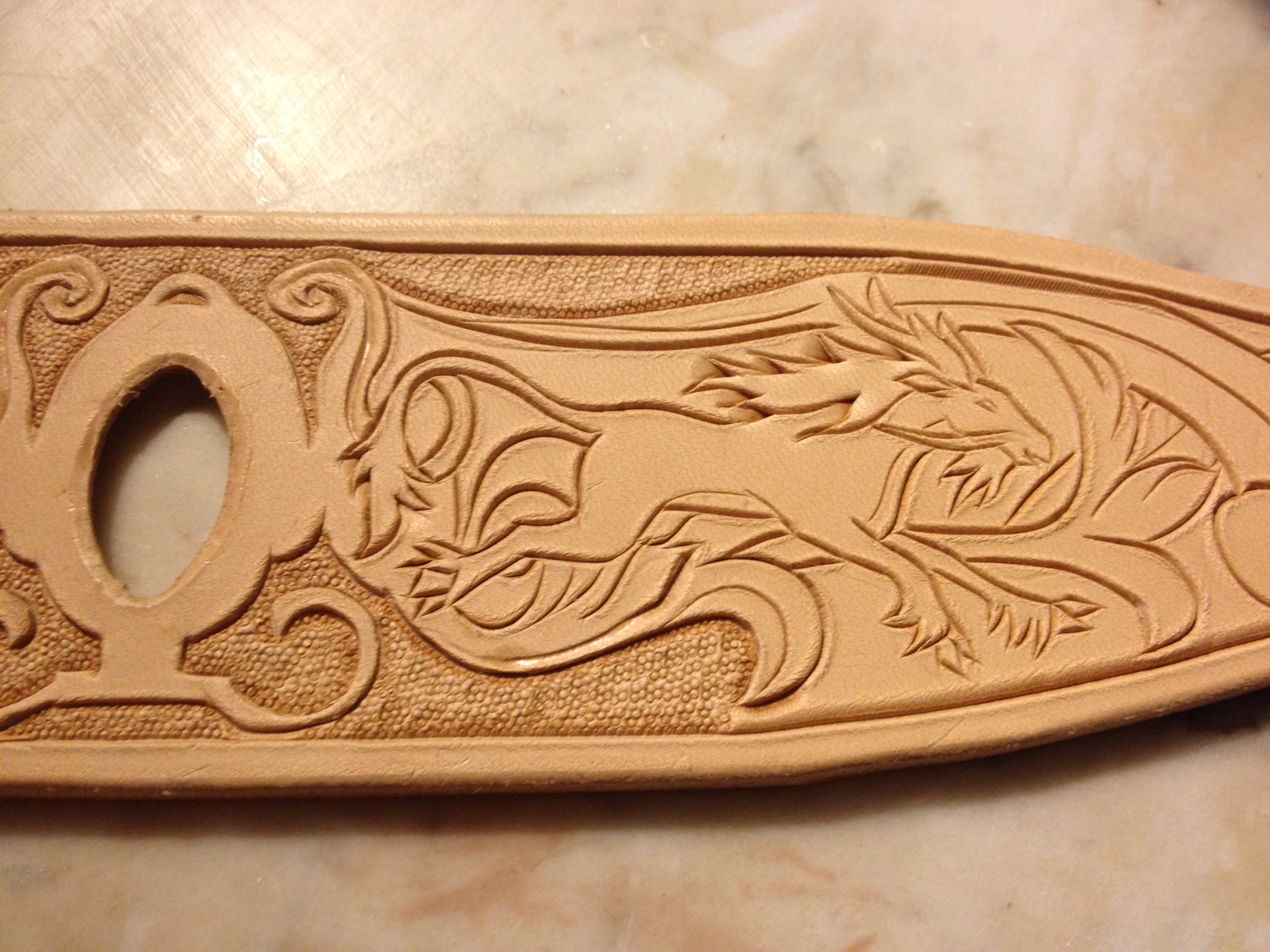 On Wikipedia, the Qilin is described as:

…a mythical hooved Chinese chimerical creature known throughout various East Asian cultures, and is said to appear with the imminent arrival or passing of a wise sage or an illustrious ruler.[1] It is a good omen that brings rui (Chinese: 瑞; pinyin: Ruì; Wade–Giles: Jui4; roughly translated as “serenity” or “prosperity”). It is often depicted with what looks like fire all over its body. It is sometimes called the “Chinese unicorn” when compared with the Western unicorn…

There are many different ways Qilin have been described. Some think of them as a rare form of unicorn; others have described it as a creature that has the head of a dragon and a body of tiger with scales. Others see it as a creature with a single horn on its forehead, a multicolored back, the hooves of a horse, the body of a deer, and with the tail of an ox.

It can even breathe fire, which leads me to think of the creature as an Eastern dragon/unicorn hybrid. This describes my Saluki boy quite well… he’s beautiful but fiesty. 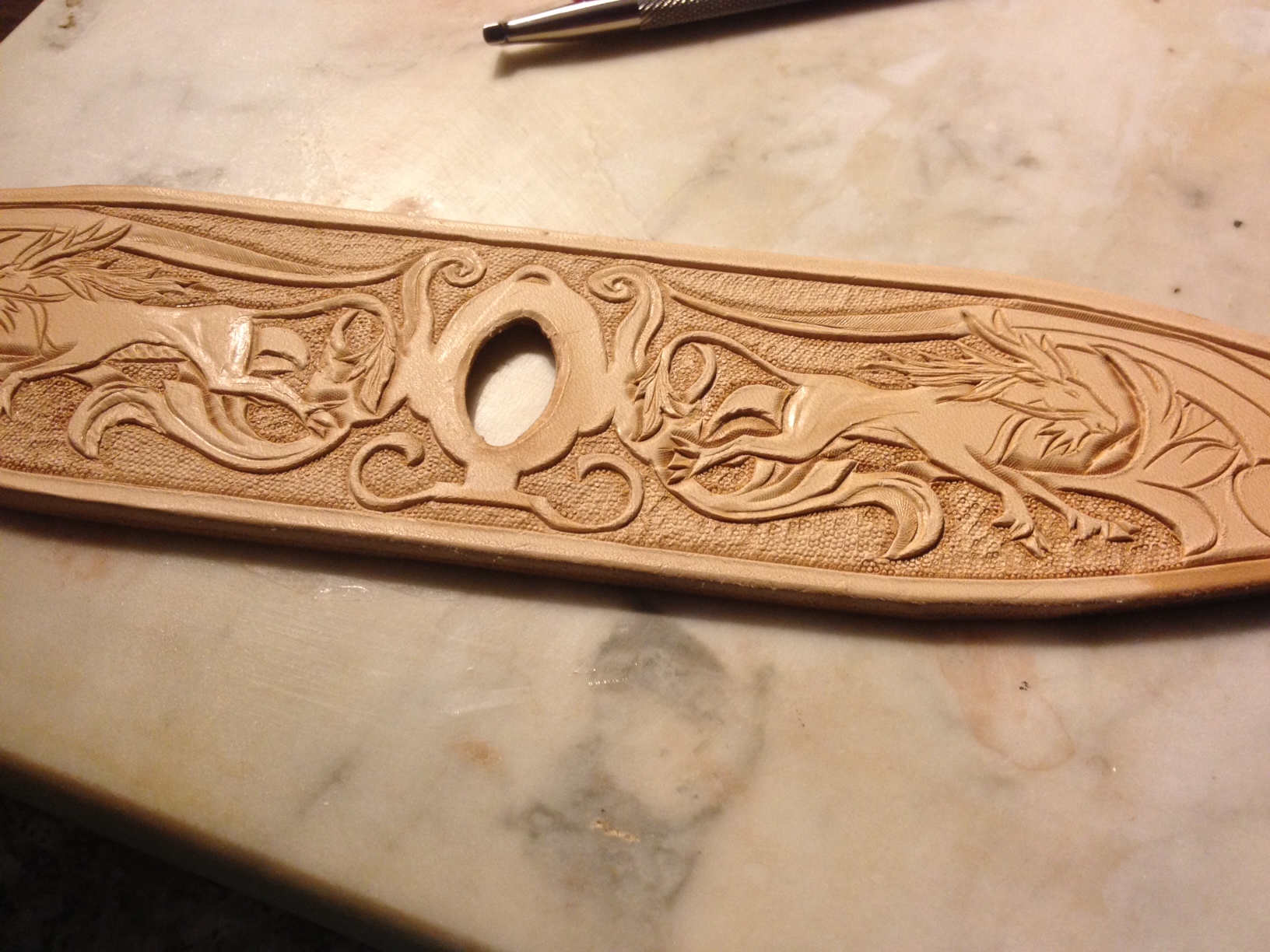 The carving is starting to develop. Before the fire I had ordered a modeling tool from Peter Main, which was highly recommended by some of the figure carvers on the Leatherworker forum. Fortunately, it arrived after the fire, and I used it for the first time on this collar to model the muscles of the Qilin creature. I would consider Peter Main to be THE master leather figure carver, and I’ve idolized his work for a long time. It felt almost like receiving a personal autograph from a celebrity when the tool arrived. The tool can most succinctly be described as a double-ended modelling spoon, although the shape of the spoons allows you to achieve many different effects depending on the angle of use. It’s a wonderful tool, and would make for a great blog post on its own once I’ve had more time to experiment with it.

I’ll keep you posted! The collar is actually finished now, and turned out beautifully, though I’m still trying to photograph it in such a way that the moonstone flash shows up in the photo. Kirin wore it to the Saluki specialty and drew many positive comments!